One of the greatest challenges of cities is the issue of spatial justice – having fair, inclusive and healthy urban environments. But how do we make evaluations about what is fair and what is unfair in urban development, and how can we improve processes to make them more inclusive, more diverse and more democratic? Dr. Roberto Rocco, Associate Professor at TU Delft’s Faculty of Architecture and the Built Environment, explores these issues and believes that learning from different perspectives must be part of the process.

With a background in architecture and urbanism, some years ago Rocco discovered his real interest was in cities. He wanted to know how they work and how to make them better. One way to do that, he says, is to understand the governance of cities – who makes the decisions, how they are made, and how cities are planned. This governance aspect became central to his work.

Rocco began to understand governance as an interaction between the public sector, the private sector and civil society. “It’s a world in itself, to understand how contracts are made, how plans are agreed upon, how businesses influence urban development,” he said. “I started to realise there are written ways in which these things are decided, but there are unwritten informal ways of making agreements. I try to understand the governance of urban change and urban sustainability. But within governance, I was also very interested in one issue that fascinates me, the issue of justice.”

Creating a broad conversation on these topics is important to Rocco, so he aims to elicit contributions from a global community.  An example of this is the book A Manifesto for the Just City, the result of an online workshop organised each October when students are asked about their visions for a just city. Compiling essays from hundreds of people into a book, Rocco says: “We want to move in the direction of a global community of people discussing justice and what is the just city. It’s a collective visioning exercise in which we invite students and teachers from around the world to think along,” said Rocco. “What is the city that is good for everyone, that is fair, healthy and safe?”

Another open book Rocco published, Teaching, Learning & Researching: Spatial Planning, aims to provide an introduction to how spatial planning is conceived at TU Delft. Also a collective endeavour, the book is 18 chapters of contributions from teachers and researchers in the Spatial Planning Department at TU Delft. “We all tell stories about what we think, what our specialities are, how we teach, and how we see spatial planning,” said Rocco. “Through this effort we actually got to know our colleagues better and we strengthen our community.” 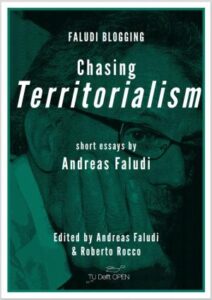 As an editor, Rocco was also instrumental in publishing a book called Faludi Blogging: Chasing Territorialism. It is a compilation of blog posts written over two years by Emeritus Professor Andreas Faludi. His blogs centre on the idea that territory is a kind of tool that states use to control the lives of their citizens and to organise politics. According to Rocco, Faludi challenges that and says we need to go beyond our territories and borders to think of the world, particularly Europe, in a different way.

And Rocco has been working on yet another book about the practice of teaching values in design and engineering at TU Delft. “There is a huge community at TU Delft that believes technology is not neutral, it always has values expressed in it,” he said. “If you claim technology is neutral, you’re hiding the true values that are somehow expressed in the technology. This community believes that we need to make those values explicit, but we also have to talk about the good values that we want to put forward and how to teach this.” Rocco notes that the Ethics and Philosophy of Technology Section at the Faculty of Technology Policy and Management (TPM) at TU Delft has done a lot of work on this topic, saying the new book is “just adding a little pebble in the pot”. The book, edited in partnership with Maria Novas and Amy Thomas, is set to be published online soon.

Learning from each other

Another project Rocco is closely involved with is the TU Delft Summer School Planning and Design for The Just City. This annual event brings students together from around the world to Delft for an immersive two-week programme. It combines spatial planning, urban design and environmental technology to tackle issues of sustainability, climate adaptation and water management in urban environments, putting spatial justice at the centre of urban development.

Students learn from a wealth of local knowledge about what it means to plan a city in the Netherlands, but Rocco said there’s a lot to learn from the students. “It’s the same idea of creating this global conversation, but it’s important that these are global conversations of equals. There are a lot of good traditions here in the Netherlands but students can also teach us about how things work in their own countries,” said Rocco. “I feel this is missing at TU Delft; we should invite our students to teach us more than we do currently.”

Having also published commercially, Rocco said he prefers to publish open source. “Because I work for a public institution, I think everything I do should be public,” he said. “That’s the way to go.” He also feels that open access publication is particularly important for people in the Global South as it helps to create a broader, more inclusive conversation. “A lot of these journals and publications are behind the firewall and people in many countries don’t have access. This changes the game completely and makes a global conversation possible because we want to read more from people in other countries, but we also want people from other countries to have free access to things here.”